The collective IQ of my household is 58,732. On hearing this, Please do not rush to us to solve important problems like the best way to make a volcano famous or which is the next country Brad Pitt should adopt from.

This is because as a family we are normal folks with average intelligence. However we have really smart gadgets to help us out to increase the collective intelligence. It normally starts off with me reading the important parts of the newspaper – advertisement.  The ads typically run like this. “Our ACs are really smart. They save 18% of power and can sense your presence in the room and direct the airflow towards you”.  Being powerless the first utility is of no great use to me.

My friend bought this air conditioner. I spent most part of an afternoon jumping around the room to see whether the air flow gets directed. It is true; the air conditioner can sense my presence. The air flow start flowing towards the TV after it was switched on with SRK dancing around. It is not the case of one smart device seeking another.  Apparently the AC can sense the net worth and smarts too.  I normally stick around with my wife whenever I visit my friend’s house.

My grandma was visiting us when we bought a fully automatic washing machine twenty years ago. She was fascinated by the machine that it can take drudgery out of everyday life. She asked me the cost of the machine. When I told her that it costs around Rs. 12,000, she almost fainted. Obviously she wanted to get me tested for sanity. She got over it and asked the reason for it being so expensive. My answer was “it is fully automatic and it does everything by itself”.  Her retort was “for that kind of money, hope it undresses you, washes the clothes and put it back on you”. She never stood near the machine, lest there is a misunderstanding of the intent.

As a man who like statistics, I run with Garmin Forerunner 305 GPS Receiver With Heart Rate Monitor

with and a NIKE + IPOD SPORT KIT. It has been known that Air Traffic Controller routinely declare my running route as “No Fly Zone” as I cause disturbance to the Earth’s magnetic field. The first one is an awesome GPS watch which accurately tells me my location, speed and heart rate. It gives me great kick to announce that we are in Lalbaugh and my heart rate has just jumped. My friends are definitely not enthused as there are thousand sign boards to tell our location. They are also worried when I make the heart rate comment as it is usually preceded by a pretty one passing by. They think I will get literally kicked.

I am not so bothered. They (My friends) will go green with envy when they hear about the future millions in my bank and never have any marital trouble. This is because I have started asking for stock tips and life advice from our Food Processor. It has fuzzy logic, you see.  The day will come soon when both SRK and I will get the same treatment from the air conditioner.

PS:- I do not own any shares of Panasonic (not yet) or Garmin or Nike. My food processor is quite silent on that front.
Posted by Showa at 12:15 PM 2 comments:

I have answered the most important question in life here.

Why the heck middle age is called the middle age?

Folks who are still in school; I am not referring to the time period in earth where hairy people rubbed stones to make fire and poked each other with spears instead of facebook. Gee, they did not have facebook at that time; losers.

I am talking of the age when your parents can embarrass you by breathing.

Here is the answer to the important question. It is called the middle age because whatever you eat it ends up in the middle. Alarmingly your age becomes your waist size.

One day in the morning, I woke up and found out that I have stepped in to middle age. I did not realize it till my wife subjected to me a fidelity test which I have always failed till date.

“What do you think of the pretty model on the billboard”

I replied “It is good, but I heard that the next release is going to have 3G and multi-touch”

She went quiet and I think her cheek was wet with tears. This has never happened before. She can now claim her husband to be completely hers. Only thing is the most of the time her husband is bumbling around the house asking “Who am I”. Not philosophically because it is bloody hard to remember.

It happened during my wife’s annual trip to her in-laws and my in-laws. It is the scene straight out of the movie – Seven year itch. My mind was filled with all the wild things I would do during her absence. I could not remember of even one though. Alas, there was no Marlyn Monroe to seduce me. Hence, I called up the person who comes handy during this time to correct the situation – Russell the Artist. I knew that he was an artist because among other things he had his nose pierced. He is no ordinary artist, he makes permanent markings on your body, through mutual consent.

I went to a social gathering with a teaser portion peeking out and proudly declared – “I got a tattoo”. One pretty young one approached me. I thought at last I have become super cool but my world came crashing down when she said “Uncle, where is the tattoo”. I bit back by tears, ignored the uncle bit and replied in a husky voice “On my biceps”. She started laughing out loud and said “What biceps”. The dam burst and my Tshirt was wet with tears (Read all about me trying to build biceps in Gym capers, way to stronger teeth).

So If you see a middle aged guy with a wet Tshirt, mumbling to himself “who am I”. Show him this picture to remind him about his identity. 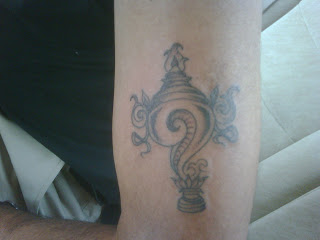 If you are a lady, give him a hug. Please do ensure that his wife is not around though.