Running Jacks have a podium finish

I live in a very beautiful community called Jacaranda in a large apartment complex - Brigade Millennium. We formed a running team on the fly (with in 24 hours) to take part in the 4 x 5 KM relay race. The race was a mock up to the corporate relay race - Urban Stampede to be held two weeks later.

It was at a resort called Olde which is close to the Bangalore International Airport. The team consisting of Vinayak, Rohan, Subbu and myself assembled on time at 4:25 AM. Since we do every thing in style, we were accompanied by a Manager - Ram Prasad. The only team to do so. We did not equip ourselves with walkies talkies because our Manager pointed out the fate of Hansie Cronje when he used it.

The race was to start at 6 AM and that is what I thought at least. However the way I misread women's emotion, I misread the time too. We left the apartment complex at 4:45 and reached the resort at 5:25 and that is when I realized that the race was at 7 not 6. Thankfully the registration started at 6:15. The race was professionally arranged by Runners for Life, with batons, split timings, water stops etc.

The weather was really nice and the resort looks good. We decided that Subbu will start the race and pass the baton to Vinayak. I will run third and Rohan will anchor the race.We did a recce of the finishing lap before the start of the race.

The race started at 7 past 7. The race was on a pucca road but passing fields and nurseries. An occasional car or bike were the only things to remind us that we were in urban Bangalore. The course went uphill all the way till the U - turn point. It crossed some High Tension wires on the way which were making a constant hiss sound. The way back was down hill and hence easier.

Subbu and our Manager Ram ran with me during my leg. Subbu acted as my pace setter. It was incredible for Ram to do 5K on his first run ever. Way to go.

At a total timing of 1:51:57 we had a second rank podium finish. We could have done better as Subbu missed the entry to the resort and Rohan missed the return point of the race. The photograph of the proud runners' up with the team Manager 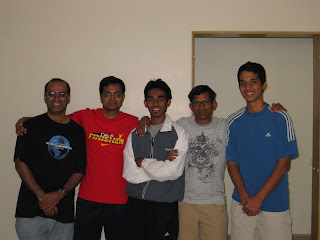 As my regular readers know that "Not only - but also combination" is the only grammar rule I know. Here is an example of my grammatical prowess.

Thanks a lot to Subbu who not only drove us all the way but also fed us. I am thankful to Ram who not only looks much younger than his age but also infused infectious enthusiasm in to the team. I should definitely thank cool dudes Rohan and Vinayak who not only helped us to the podium finish but decreased the average team age by 40%. :-)